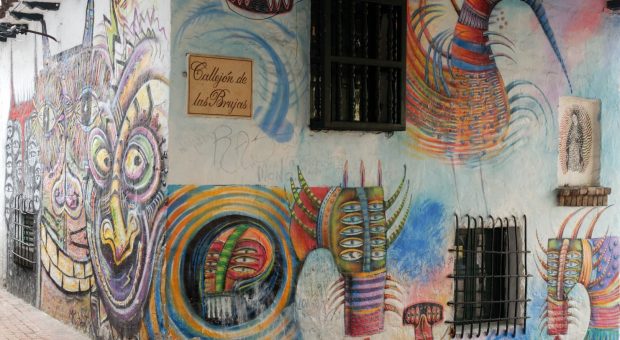 It is not a secret that Colombia is a true gem when it comes to art. Although when we are talking about artists the most probable names in our minds are Fernando Botero or Enrique Grau. But have you ever heart about DJ Lu, Guache or Stinkfish?

If you already walked through Bogotá’s Candelaria you saw their work for sure. Colombia’s graffiti art became very popular during the past 10 years and can mainly be found in Bogotá, Medellín and Cali. On the first sight graffities seem just like a nice wall painting, often very colorful and loud.

However, you should have in mind that a lot of artists use their work as a voice. The graffities do not only give an area a certain feeling but show self-expression, political criticism or cultural elements. In Bogotá’s Candelaria neighborhood for example some topics that are expressed by graffities are the armed conflict or the situation of the indigenous people.

If you want to know more about some of the graffities, the artists and their message, a graffiti tour would be a great option for you, which could be included in a tour like “From Highlands to Caribbean” in Bogotá or in Medellín during the “Best of Colombia” circuit.